A Review of "How We Got The Bible"

February 14, 2019
"How We Got The Bible" written by Neil R. Lightfoot is a concise and introductory book that gave me a foundational panoramic of the history of the Bible. From manuscripts to being in the possession of the "boy in the plow", the history of Bible no doubt is a miraculous one.

This is my first time reading about the history of the Bible and honestly I was quiet overdue. It's something every Christian who believes in the Bible should know. The contents and basis of our faith are inscribed in this wonderful compilation.

Lightfoot has done a fantastic job explaining the important aspects of the discipline, without ever becoming tangential. Chapter after chapter, the authorship and canonization of both the Old Testament and New Testament are concisely described.

However, even though the book is introductory, it wasn't all an easy read. The terminology and rhetoric used has a very academic tone, meant for a  more thorough discussion at the end of each chapter. It's meant for a student, not a casual reader. Nonetheless, that shouldn't deter the casual reader interested in the Bible. The history is presented in way that would be fascinating to any Christian believer.

A lot of my questions were answered. Regarding the inconsistencies found among the early manuscripts, Lightfoot writes concerning the scribe's intentional errors:

"Unintentional alterations in the manuscripts are many, but the vast majority of them are of little consequence. What presents a more serious problem to the textual critic are the variant readings that have been purposefully inserted by the scribe. We ought not think these insertions were made by dishonest scribes who simply wanted to tamper with the text. Almost always the intentions of the scribe is good and he wants only to "correct" what appears to be an error in the text. So if a word seems improperly spelled, or a Greek verb does not have the proper ending, or a form does not correspond with the classical idiom, then the scribe feels it is his duty to improve the text he is copying." - pg. 90

Some sections that stood out to me:

Our New Testament text of today is a reconstructed or restored text. It has been reconstructed by modern scholarship from three independent lines of witnesses: the manuscripts, the versions, and the writings of early Christians (Church Fathers). - pg. 112

Sir Frederic Kenyon often expressed his confidence on the wholesome condition of the Biblical text. He once wrote, "The Christian can take the whole Bible in his hand and say without fear or hesitation that he holds in it the true word of God, handed down without essential loss from generation to generation through the centuries." - pg. 126

The Massoretes were not concerned with only such things as proper pronunciation. They also sought ways and methods by which to eliminate scribal slips of addition or omission. - pg. 132

When the church of Christ was first established, it had no thought of a New Testament. Its Bible was the Old Testament and its new teachings were based on the authority of Christ as personally mediated through the apostles. -pg. 156

In A.D. 367 Athanasius of Alexandria published a list of twenty-seven books of the New Testament that were accepted in his time, and these are the same twenty-seven that are recognized today. - pg. 159

Tyndale's sacrifice for his cause has long been appreciated, but it is doubtful if many today know how direct and pervasive his influence was on the English Bible. It was Tyndale who established its tone, that the Bible should not be in the language of scholars but in the spoken language of the people. -pg. 178

Steadfastly defending these principles, unbending to the end, on an October morning in 1536, Tyndale went to the stake. He was strangled and burned, crying out, "Lord, open the king of England's eyes." - pg. 180

What can be said in favor of the American revision? First, the revision of 1901 is based on a Greek text which is far superior to that employed by the King James translators. Many of the earlier and most important New Testament manuscripts that were not known in 1611 were accessible to the revision committee, and accordingly its translation was based on these manuscripts. -pg. 190 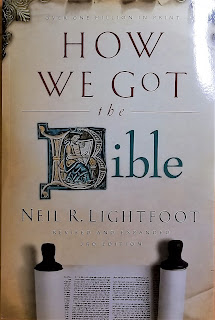